The Agriculture, Fisheries and Conservation Department (AFCD) released a green turtle in the southern waters of Hong Kong today (June 25).

The green turtle was rescued in the waters of Lantau South on January 4, 2021. Following an initial check-up by the AFCD, the turtle was taken to Ocean Park Hong Kong (OPHK). It was assessed by veterinarians of OPHK and placed under continuous monitoring and veterinary care.

An AFCD spokesman said, "The green turtle released today weighed 16 kilograms and its carapace length measured about 52 centimetres. It was assessed by veterinarians of OPHK as being in good condition and ready to return to the sea. The department is thankful to the veterinarians and staff of OPHK for taking care of it."

The green turtle is a globally endangered species and is the only sea turtle species known to nest locally. In Hong Kong, all wild turtles (including sea turtles) are protected by the Wild Animals Protection Ordinance (Cap. 170). No person shall, except in accordance with a special permit, hunt or wilfully disturb, possess, sell or export sea turtles. Otherwise, they will be liable to a maximum fine of $100,000 and imprisonment for one year. The specimens will also be forfeited upon conviction.

In addition, all sea turtle species are listed in Appendix I to the Convention on International Trade in Endangered Species of Wild Fauna and Flora and regulated under the Protection of Endangered Species of Animals and Plants Ordinance (Cap. 586) (Ordinance) in Hong Kong. The import, introduction from the sea, export, re-export or possession of specimens of sea turtles not in accordance with the Ordinance is an offence. The maximum penalty is a fine of $10 million and imprisonment for 10 years, and the specimens will also be forfeited upon conviction.

Members of the public are urged to report any sighting of sea turtles or suspected irregularities involving sea turtles to the AFCD via 1823. 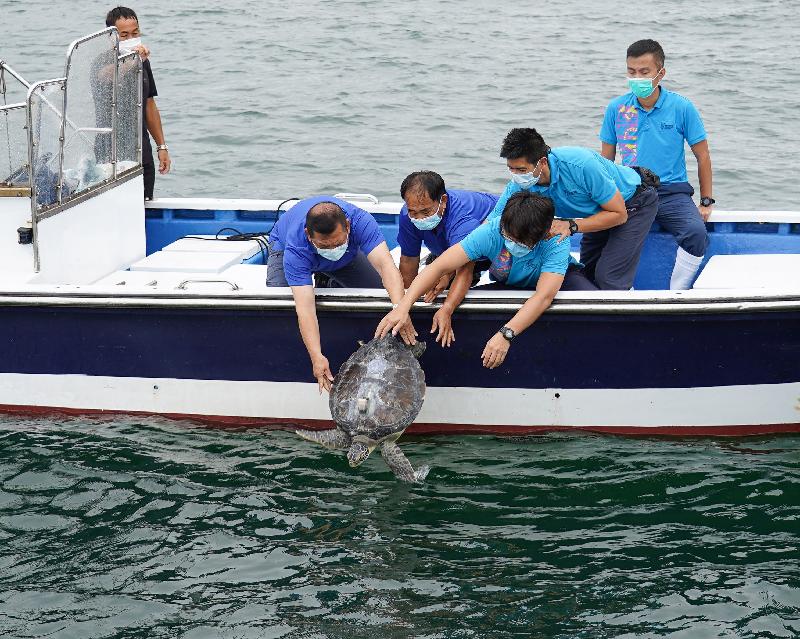 The Agriculture, Fisheries and Conservation Department released a green turtle in the southern waters of Hong Kong today (June 25). Photo shows the green turtle, rescued in the waters of Lantau South on January 4, 2021, being released into the sea.